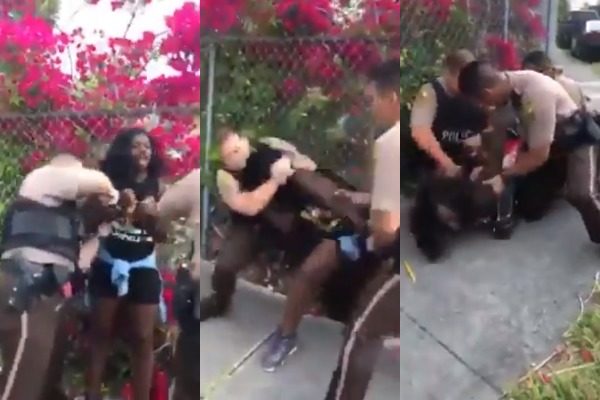 Dyma Loving, the 26-year-old Florida woman brutalized by police after calling for help when her neighbor allegedly brandished a shotgun and threatened to shoot her “burnt black-ass face off,” is now suing the Miami-Dade Police Department in federal court.

“Dyma’s lawsuit against these parties, both collectively and individually, addresses the complete and total breakdown of the officers’ inability to serve and protect her properly,” Loving’s attorneys announced in a news release Wednesday.

The lawsuit names MDPD and Miami-Dade County as defendants, along with Officers Alejandro Girlado and J.F. Calderon for a litany of claims, including false arrest, false imprisonment, excessive force and deprivation of Loving’s rights, her attorneys said.

Disturbing footage from the March 5 incident surfaced online last month, showing several Miami-Dade officers manhandling the woman before tackling her to the ground. Her friend, 22-year-old Adriana Green, watched in horror from behind her camera as the assault unfolded.

Green, who filmed the incident, implored the cops to “please stop!” as they proceeded to grab Loving by the wrists, one of them placing her in a head lock before wrestling her onto the ground.

Separate footage taken from Officer Giraldo’s body-worm camera showed the officer asking Loving and her friend if they had yelled insults at Green’s 50-year-old neighbor, Frank Tumm, whom the women accused of calling them “whores” and threatening them with a shotgun as they were on their way to run errands.

Loving and Green quickly fled to safety and dialed police.

A frustrated Loving told the Miami New Times last month that she took issue with Giraldo questioning them as if they were the suspects, calling his demeanor “rude and aggressive from the get-go.” In one video, the officer is heard threatening to “Baker Act” Loving, or have her committed to a mental institution.

“She needs to be corrected if anything,” Giraldo said.

“Why do I have to be corrected when my life was just threatened?” Loving shot back. Seconds later, she was stormed by police who pushed her toward chain-link fence, wrestled her to the ground and placed her in handcuffs as she pleaded with them to let her call her kids.

“Yes, I was yelling, but my adrenaline was pumping — I almost just lost my life,” she told the New Times. “I never threatened anyone. I was just pleading to speak with my kids.”

Loving was arrested and charged with disorderly conduct and resisting a police officer, both of which were dismissed. Meanwhile, Tumm was not arrested until nine days after the incident. Authorities charged him with aggravated assault with a deadly weapon.

MDPD Director Juan Perez addressed the arrest video on Twitter last month, saying “I find the actions depicted on the video very troubling and in no way reflective of our core values of integrity, respect and fairness.” He later confirmed that Giraldo, a field-training officer, had been suspended pending the department’s investigation into the incident.

In addition to her complaint, Loving is asking State Attorney Katherine Fernandez Rundle‘s office to file charges against the officers who brutally arrested her.

“It’s important to note that while pursuing prosecution of Dyma’s civil claims against these state agencies and the officers who aggrieved her is important, this will not take the place of criminal prosecution by the State Attorney’s Office,” Loving’s attorneys said, adding, “Thusly, we renew our pleas for the State Attorney to fulfill the duty of seeking equal justice for all people in the Miami-Dade area without condition, and we further our pleas that these two officers’ positions at the police department be vacated immediately.”