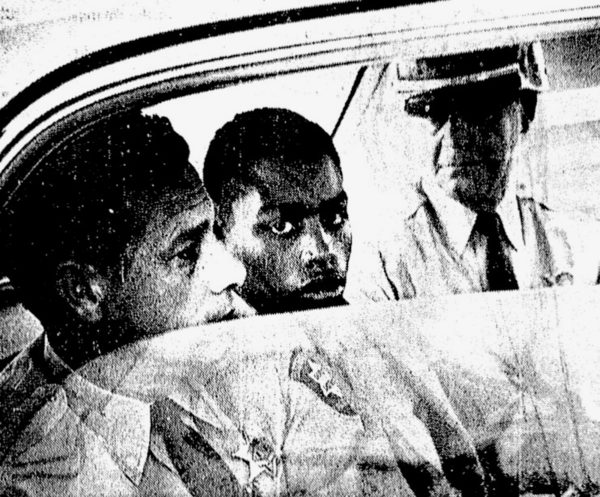 BATON ROUGE, La. (AP) — A Louisiana inmate whose case led to a landmark Supreme Court ruling extending the hope of freedom to juvenile offenders sentenced to life without the possibility of parole was again denied that freedom on Thursday after more than five decades in prison.

A three-member board voted 2-1 in Henry Montgomery’s favor, but parole decisions must be unanimous in Louisiana.

“It’s a tough, tough decision,” said board member Brennan Kelsey. He was the last member to vote and the only one to vote against Montgomery’s release. “Unfortunately, Mr. Montgomery, I am going to vote to deny your parole.”

Montgomery’s lawyer, Keith Nordyke said he was shocked at the outcome, and that the legal team will meet in the coming days to figure out their next steps. Speaking of Montgomery, he said he was disappointed but resolved.

“He’s stoic, as anyone who has spent 55 years in prison is. His last words to me as I was leaving the prison were ‘I’m not giving up. I’m not giving up,’” said Nordyke. Both he and Montgomery appeared via video conference from the Louisiana State Penitentiary at Angola.

Montgomery, now 72, was convicted in the 1963 killing of an East Baton Rouge sheriff’s deputy named Charles Hurt; Montgomery was 17 at the time when he killed the officer, who caught him skipping school.

Then the Supreme Court ruled in 2012 that mandatory sentencing of life without parole for juvenile offenders was “cruel and unusual” punishment. But it didn’t settle the question of whether that decision applied retroactively or only to cases going forward.

In 2016, the Supreme Court settled the matter by taking up Montgomery’s case, and deciding to extend their decision on such sentences to people already in prison.

But so far that decision has not translated into freedom for Montgomery. A board voted in 2018 to deny him parole.

During Thursday’s hearing the 72-year-old Montgomery struggled to hear what was being said and to express himself, often relying on one of his lawyers to help him understand the proceedings.

When asked about the shooting, Montgomery said he knew he’d committed a crime and shot the officer.

“I’m sorry that all this happened. I’m just sorry,” he said later.

His supporters described in detail what Montgomery’s life had been like in prison and how much he’d contributed to improvements in the once-notorious prison. He started a boxing program that was later extended statewide, was a member of a Methodist fellowship group, and worked in the prison’s silk-screen shop for decades where his lawyer Lindsay Blouin said he’d been named employee of the month “more times than I can count.”

Jill Pasquarella, from the Louisiana Center for Children’s Rights, was there to support Montgomery.

“We’re obviously extraordinarily disappointed,” she said. She said the premise of the Supreme Court’s decision restricting life sentences without parole for juveniles is that children can change. “Henry has spent 55 years demonstrating that change.”

The lone board member who denied parole cited concerns he had that Montgomery hadn’t taken part in enough rehabilitation programs. But Pasquarella said Angola was a “very different place with very different programming” when Montgomery arrived and that as a prisoner he actually helped create many of the programs now available.

Nordyke said Montgomery took more programs after the 2018 hearing but hasn’t been given specific information on what programs he should take.

“I feel like the board is moving the goalposts,” Nordyke said after the hearing.

Hurt’s family also spoke during the hearing, describing the pain that his death had caused them as well as their anger at having to come back for Thursday’s hearing; when Montgomery was denied parole in 2018 he wasn’t eligible for parole until 2020 but his lawyer applied for a rehearing and it was granted.

“I will never have my father back,” Hurt’s daughter, Linda Hurt Woods, told the board. “That is the real tragedy here, not that he has been in jail for 55 years.”

Speaking after the hearing, Hurt’s grandson, J.P. deGravelles said the decision to reject parole was “fair.”

“There’s no winners or losers in something like this. Mr. Montgomery is right where he needs to be,” he said.

The Supreme Court’s decision was based in part on research that shows adolescent brains are slow to develop so teen offenders are more likely to act recklessly but also can be rehabilitated. Therefore, they shouldn’t be sentenced as harshly as adults. The sentence can still be used but only in rare circumstances for those unlikely to be rehabilitated.

Since then 1,850 people have been resentenced, including 450 who have been released, said Jody Kent Lavy, executive director of the Campaign for the Fair Sentencing of Youth. She said 21 states now ban life-without-parole sentences outright and five others have it on their books but don’t use it. In 2012, only five states banned life-without-parole sentences for juvenile offenders.