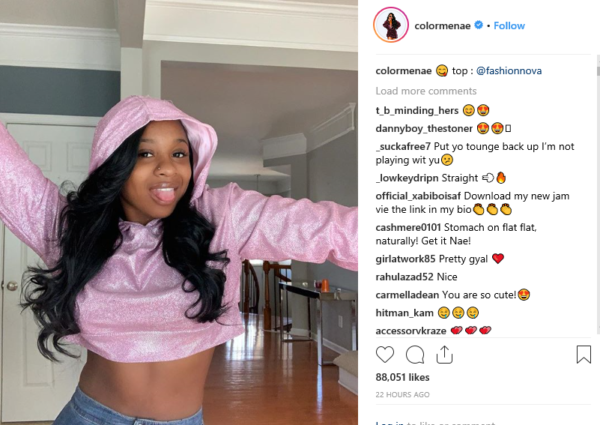 The 20-year-old has the Internet shook after flossing her snatched waistline in recent photo. She took to her Instagram feed on Wednesday afternoon and uploaded a photo of herself playfully posing in a pink Fashion Nova cropped top and a pair of low-rise denim jeans.

“I need your waist it’s too snatched

Nae is my dream summer body all day long

“Cute face slim waist! And your stomach on flat flat

I love you baby, you worked that tummy off Nae!”

I need to get back in the gym

Carter’s snatched waist was seemingly obtained by her recent lifestyle change. Around October, she told fans that she’d been working out with a personal trainer who helped her drop 10 pounds. She apparently began eating cleaner and increased her fitness regimen with intense boxing workouts, helping her tone her arms, legs, core, obliques, and more.

“I wanna thank my trainer @iamthekingoffitness for helping me through this fitness journey!” she wrote in an Instagram post at the time. “I had discipline and I stuck with my diet! #NoDaysOff.”

The reality star’s physique showing post follows on the same day of her premiere date announcement of a new film she’s starring in.

Last November, she announced on social media that she had landed her first major acting gig in the upcoming Lifetime film “Pride and Prejudice: Atlanta.” The film is an all-Black contemporary version of “Pride and Prejudice,” based on the 19th century novel by Jane Austen. It’s set to premiere Saturday, June 1, at 8 p.m. ET/PT on Lifetime network.